To Dad, on Father's Day

Sometimes you don’t need to look far to find inspirational people. In my case, I just need to look to my dad. Since it’s father’s day, this one’s for you, Dad.

To Dad, on Father's Day

Next Sunday, my Dad will run his 24th consecutive North Downs Run. A challenging 30km race over the undulating terrain of the North Downs. Finishing the race is an achievement for anyone, running it for a 24th time just shy of 70 years old is even more impressive. But what’s even more remarkable is the comeback Dad made from a nasty bike accident to make it to the start line last year.

In December 2015, I was getting ready to come home for Christmas when I got an ominous text from my mum: “Don’t panic, but…”. She was writing from the hospital, where she’d taken my Dad after he’d come off his road bike in the country lanes near home. An initial X-ray had found a broken collar bone, but no one could understand why Dad was in such agony until an MRI the following day revealed a fractured hip. I was there the next day as Dad went off to the operating theatre to have the hip pinned back in place. My Dad, slight at the best of times, looked incredibly weak and frail. It was a nervous wait.

Dad has always been extremely active. As well as the North Downs Run, regular bike rides and nine marathons, it seemed that every time I called my parents they were off doing another park run here, or 10km there. Though it was very early days, we wondered how his life would be impacted and whether he’d be able to get running again.

Fortunately, the operation was a success. Though still in a lot of discomfort, he was already in a lot less pain. And as we celebrated Christmas around his bed, the recovery began.

Progress was slow. He meticulously logged every step, every milestone, determined to get running again, where others would have resigned themselves to the sofa. Winter turned to spring and he was starting to make it round the local Shorne Woods park run. He walked at first, before graduating to running.

Throughout this time, there was one question mark hanging over Dad’s head. Having run every North Downs Run since 1993, would he be able to make it round in 2016? It was certainly a challenge. The looming race day gave him an aim and focus, something to work towards the whole time. But could he really do it?

As June arrived, it was still a close call as to whether he’d be ready. But determined, he signed up and took to the start line on the day wearing number 23 for his 23rd race. Finishing the race in just under four hours (3:59:41) was an emotional moment and an incredible achievement.

Dad, your patience, determination, energy and encouragement is truly special, and if I have a fraction of that when I’m in my 60s I think I’ll be doing ok.

We love you and couldn’t be prouder, and I look forward to running this year's North Downs Run with you on the 25th. 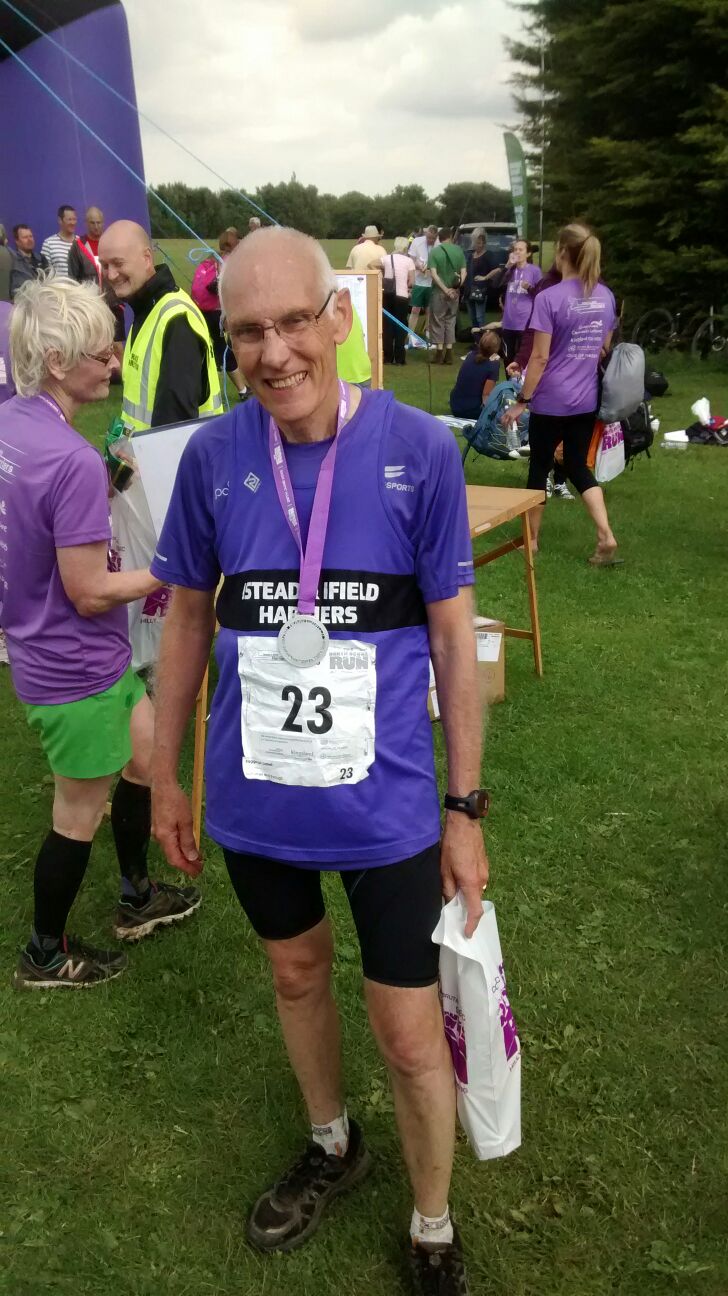 At the finish line!

And thank you Alison for sharing your story with us.