2 Berlin runners share their tips to successful training in the wintertime.

Although it may not feel like it yet, winter is coming to Berlin and the rest of the world. The combination of the cold and lack of motivation can poorly affect a runner’s performance in the winter. We certainly can’t change the weather, but it’s up to the runner whether or not they want to run. Motivation comes easy in beautiful weather, but when it’s cold, it’s harder to get out and get training.

We see the challenges that runners face in the winter, so I decided to see how others combat the lack of motivation in the winter. I sat down with two runners from Berlin to gain some insight on how to stay motivated to run during the winter season.

Björn Hesse and Alex Wieberneit are two long-time runners in Berlin. Hesse is a Pose Method running coach and Wieberneit has been running since 2005. Both understand what it’s like to not want to run when it’s cold, but “Champions of the summer are made in the winter,” according to Weberian.

There are three main ways to stay motivated during the winter months.

Look ahead: Plan your races for next season!

When it starts to get cold and the running season works its way to an end, start planning and signing up for races for next year. Having a date set on the calendar will push you to keep your training going so you can succeed in the event.

Wieberneit plans his entire season before the current one is even over.

“[It’s about] knowing that you don't get there if you don't do this training. If you keep skipping and skipping you won't make it to the marathon,” says Wieberneit.

The weather shouldn’t be an excuse either. Race days can have just as unpredictable weather as the cold winter.

“If it’s race day, you can’t choose [the weather] anyway. There’s no option-- Especially if you put six or 12 months of training into it,” Hesse explains.

Think of that Runner’s Rush!

Why did you begin running in the first place? What is the feeling you have after completing a race? That feeling that urges you to sign up for another one? Focus on that when you’re training in the cold.

Wieberneit has a feeling he concentrates on when he runs.

“I focus on the feeling I have afterward which is... ‘I’m so happy I did it,’” Wieberneit explains.

Sometimes it can get lonely running alone, especially in the cold. When running with a partner or a group, you have the chance to motivate one another by just being there.

“It helps if someone kicks you in the butt… It’s always better than going out there by yourself,” Hesse assures.

There are many running groups all over Berlin and around the world. There are many options for running groups. Some can be for training for a marathon, some are more social, and others are for exploring beautiful cities! The Racemappr app has many groups listed.

Even though it’s getting cold, any racer now has the tools to take on winter (along with a coat and warm pants, of course) and stay motivated!

What’s next for these two runners? In a few weeks, Hesse will be competing in the Athens Marathon in Greece. Find it on Racemappr. Wieberneit’s season is over, but he’s already preparing for next year’s Berlin Half Marathon in April and then the Madrid Marathon. He’s also launching a running group, Die KinderHerz Läufer in support of the Stiftung Kinderherz.

My name is Elizabeth and I am a community manager at Racemappr, the online platform which helps people discover their next sporting challenge, from organised club races to the biggest mass participation events. Search different racing events in your area from running, triathlons, swimming, cycling, and obstacle races.

The first version of the Racemappr App is officially live on iOS and Android! Racemappr is an app dedicated to connecting the racing community. We help you discover your next challenge and connect with a community who share your passion. Click on the links below to download the app:

And thank you Elizabeth for sharing your story with us. 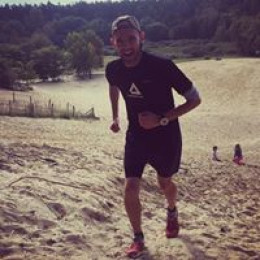 Often the hardest things are the most rewarding which I think fits winter running! It can be tough to get out the door, but then finishing a freezing cold run with snow/hail/sleet/rain is simply the best feeling!